skip to main | skip to sidebar

It was my first night race and what a tough race it was. 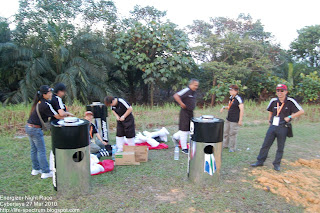 Time to change into Energizer batteries!
I started shooting at about 500m from the starting line, where there was a 1km marker (it was definitely not 1km at that point). 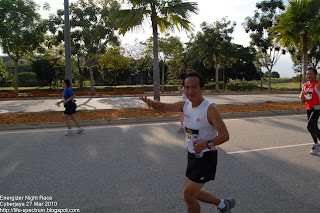 Mr Yong also running in the full marathon.
After shooting the last few runners at start, I ran to the next junction at around 3km mark and continue to shoot more photos. 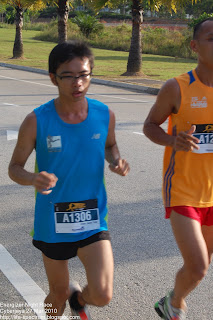 Eugene Chan looking focus and strong.
Then I ran to the 8km mark (near Ericsson office) and then 12km mark to shoot more photos. By then it was already 7:00pm. So I have to stop and slowly make my way back to the starting line. 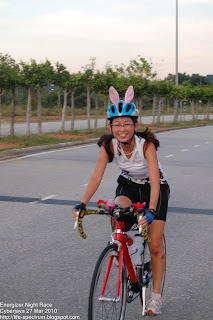 I bumped into this 'bunny' on her ride many times on the road. She was supporting her BF and other runners.
Because of shooting photos in various locations, I think I ran and walked about 6km even before the start of my 21km half-marathon.

I quickly changed and deposited my bag and went to the starting line. Then only I collected my headlight. Should had collected it earlier so that I could just put it in my bag.

The 21km flag-off was on time. I ran the first few km trying to pace with Kwang Leng. At around 6km, I felt pain in my left abdomen. A stitch! What a time to get it. I think I had drank or ate a little too much the hour before the race. I had to slow my pace and watch Kwang Leng running further and further away from me.

For the rest of the run, I just tried to adjust my pace and forcing some air out of my stomach. It did get better later part of the run, but then I was tiring fast. My heart rate was above 160 bpm (~85% max) from 14km onwards. So I have to slow down the pace towards the end of the race. Also, there were a lot of 10km runners running on the same route by then.

In the end, I finished with a time 1:52:17. Nothing to shout about. It was only my third half-marathon and I achieved my personal best in a tough condition.

After that, I had to cool down and do some stretching. I also drank a lot of water and isotonic drink to rehydrate myself. I met Ben (Swee) near the fruit station and chatted with him. He finished around 3:26 for third position in full marathon. Congrats! By the way, he qualified for Boston Marathon next month and will be running there!

I waited a while to collect my bag. Then I changed my soaking wet vest to something dry. I saw Lionel and he said he was not very well. He just recovered from flu and had a tough race towards the end.

By this time, most of the 10km runners were already back. The queue for their goody bags was getting longer and longer. I quickly got my camera and headed to the finishing line to take some photos. It was already 10:20pm then.

This time, I thought my camera flashlight was faulty or something was wrong with my camera. Most of the night-shots were under-exposed. I tried many settings to get it right, but the end results were still unsatisfactory. So I may have to dump these photos instead of publish them.

I met a lot of runner friends. Cornelius came all the way from KK. I met Lydia also. Christopher was there and finished within 5 hours in the full event.

I headed home around 11:15pm. I was already so tired. Shooting and running at the same event was really something! Especially when my body was acting up.

I will give my comments on the event in a different post later. Need to rest and recover now.
Posted by blaze at 11:28 AM

blaze
I run, I hunt, I live, and blog about it.